How To Control Giant Ragweed in Organic Farming

Giant ragweed is a giant problem, especially for organic farmers. Not only does giant ragweed decimate any potential yields, it spreads like wildfire and if left untouched, can ruin a farms yields for years. Giant Ragweed is a fast growing, early spring germinating annual broadleaf that is very prolific as a weed in the Midwest.  In conventional row crop production, it is a challenge, and in organic crop production, it can be a nightmare.

Let’s take that back. If left untouched, giant ragweed will 100% ruin yields. For obvious reasons, getting a giant ragweed problem under control is critical. The plant is so tall and so tough that it can actually dramatically affect the harvest of your crop. In small grains, or any other crop that finishes early to mid season, harvesting while ragweed is still growing will jam the combine. On the corn and beans side, you’ll have to wait for a frost to kill off the ragweed.

Here are 5 things Organic Farmers can do to control Giant Ragweed.

How to control giant ragweed in organic farming

Left untouched, giant ragweed will lead to the downfall of your organic acres. The plant is so prolific, that here in the Midwest, we’re starting to see it take a foothold in some conventional acres. All things considered, avoiding this big problem will result in a snowball effect that doesn’t help your farm in the slightest. To better understand this invasive plant, let’s take a deeper look at how giant ragweed spreads on organic farms.

How does giant ragweed spread?

The downfall is, on corn and beans, by that time if you’ve got ragweed in your field, the seeds that the ragweed makes are now viable and get spread all over your field. Eventually, you’ll move to the next field and the seeds that are in your combine travel with you and get spread to the next field. The same thing holds true for every weed that you harvest during the fall. For farmers just transitioning to organic, learning how to control weeds in organic farming is one of the most important things you’ll need to learn.

Why is giant ragweed so hard to control?

Giant ragweed is difficult to control because of the speed at which it grows and the height the plant reaches.

Giant Ragweed seed has roughly a ten year lifespan in the soil which means most fields start with an infestation from a point source.  Potential sources for Giant Ragweed seed to originate from are fencelines, contaminated seed or manure, or in dirt left on a tillage implement from a different field that already has Giant Ragweed.  To avoid this, a farmer should keep all fencelines clear of weeds by mowing or pulling weeds that surround the field.  Doing this strategically with mechanical control can have huge savings in keeping the weed seeds from spreading into the field.  When scouting fields it is not uncommon where a new infestation is to see a patch extending out from the field border in a line where the bean head had caught some plants from the fenceline and then the seeds were scattered out the back of the combine for hundreds of feet going into the field.  Clean seed and using feed and bedding that is free of seed if often worth a higher price rather than dealing with a weed problem the next year from contamination of cheap seed or feed.

Later planting can be very advantageous

Giant Ragweed is an earlier germinating weed in the Spring with a majority of the weed germinating before the fourth week of May.  In a field study, a heavily infested field was split in two with one side planted with corn on May 9 and the second half planted May 27.  The May 27th corn had roughly 75% less Giant Ragweed emerged at V1 verses the May 9th planting.  By delaying planting and doing an extra tillage pass, the farmer was able to significantly reduce his pressure right out of the gate.  The other noted advantage was, with the later planted corn, it grew faster enabling the farmer to be more aggressive with his cultivation.  The only caveat to this practice is that it is important for the farmer to note he is doing a variety selection of the Giant Ragweed and over time he will be selecting for a population that germinates later in the Spring and through early Summer.

Crop Rotation and integrating Spring and Fall seeded crops with forages (particularly alfalfa) crops enables a farmer to break the natural weed cycles and keep weed problems under control.  Giant Ragweed is no different.  A good crop rotation integrated with other practices can be used to control the weed or a strategic rotation can be used to gain the upper hand in a weedy field.  Fields that are out of control have to have the appropriate measures implemented to bring this weed back under control.  Farmers often get caught in the trap of looking at organic row crops as profitable while ignoring that their projected yield goals or weeding cost are not realistic given the weed challenges of the particular field.  When reality is added to the budget, other crops can start to look more profitable despite having an overall lower gross profitability.

Some weeds like mustard survive decades before the seed deteriorates.  Fortunately, Giant Ragweed seed only has about a 5-10 year lifespan.  Fields that are kept weed free of this weed can often see this populations reduced to a very manageable situation if keeping the weed from reseeding itself is made a priority.  Watching fields over the years, 5-6 years of very good control has reduced fields where there was 3-5 weeds per square foot to a greatly reduced pressure located in a few small patches across the whole field.  Staying on top of this weed can be very rewarding, and better yet, if a farmer stays on top of it by walking for rogue plants before it gets out of control in a field, Giant Ragweed never becomes a major problem. 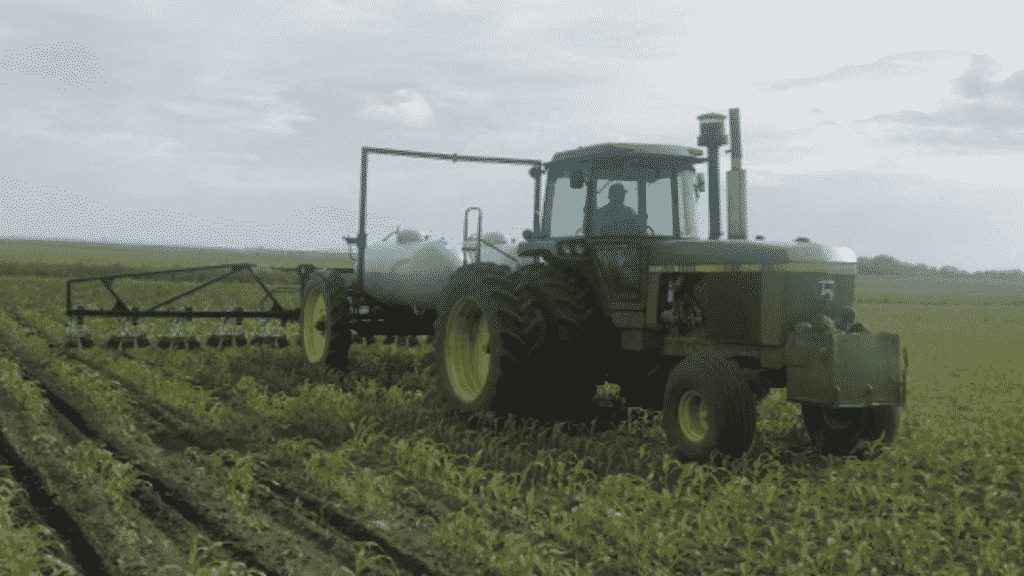 Giant Ragweed is a larger seeded broadleaf with the ability to germinate to depths of 4 inches.  Given its deeper germination depth, emerged ragweed can be very difficult to manage in the row with mechanical tillage.  Harrows and rotary hoes are generally limited in their effectiveness in being able to pull the weed out, and although a cultivator can throw dirt to cover the weed, slowed crop growth or simultaneous emergence with the crop can eliminate this as an option for control.  Flame weeders used at the proper setting when the weed is small, often can reduce populations up to about 90-95%.  Electric weed zappers can also be 100% effective in soybeans and small grain, but a farmer needs to be mindful that, given one cannot use this until the weed exceeds the canopy of the crop, there is a lot of crop potential lost at this point.  Both of these tools can be successfully integrated into a cropping system to help control this weed, but a farmer should not plan a control strategy with these two tools exclusively without implementing other cultural strategies with timely weed control passes.
All in all, Giant Ragweed is a difficult weed to control, but if an organic farmer implements many different tools and strategies, this weed can become manageable.  Fields, where the above strategies have been practiced, stand today free once again of this pesky weed.

In the video below, we’re using our weed zapper system to control weeds. The weed zapper works great as a last ditch effort. 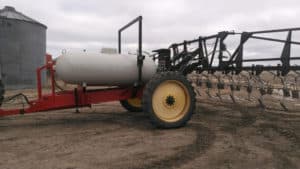 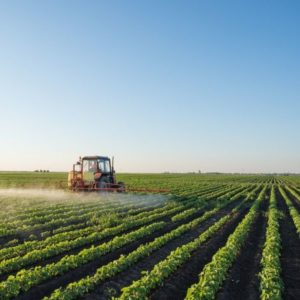 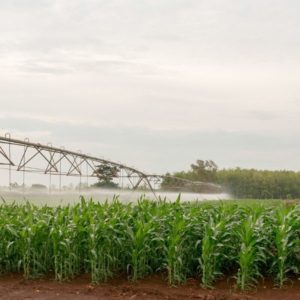 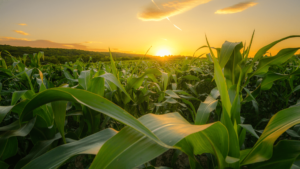 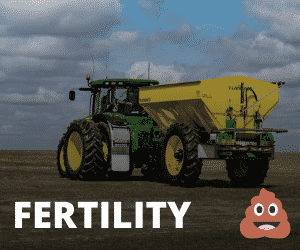 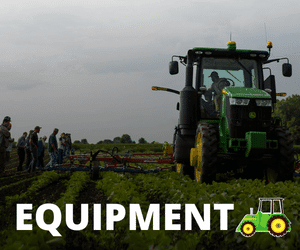 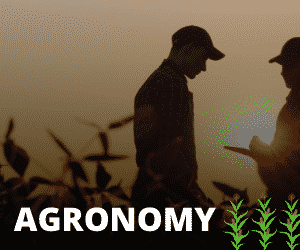 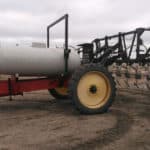 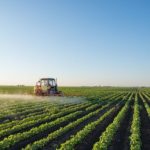 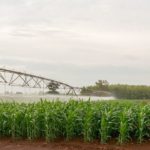 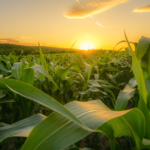 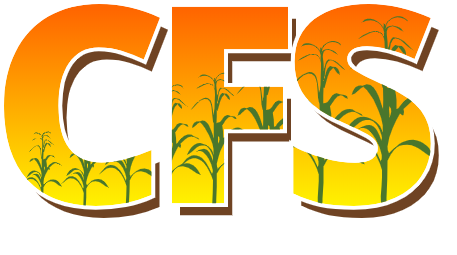